Play Stickman Hook and control it to perform amazing acrobatic jumps from start to finish. 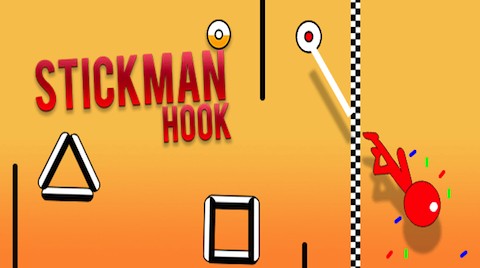 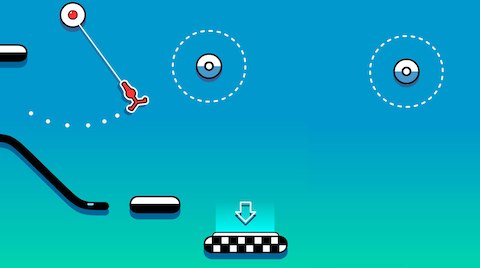 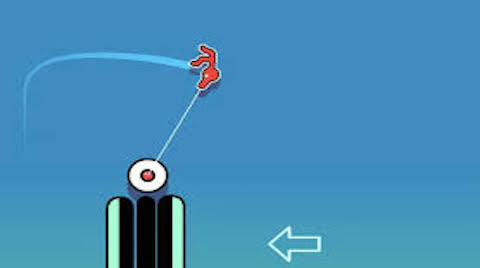 Take control of a stick figure and swing your way across the finish line. Stickman Hook is a mobile game created by Madbox. You control a stick figure that shoots a grappling hook to grab onto circles that resembles poke balls. The objective of the game is to navigate an obstacle course and reach the finish line that your character majestically dives through when he crosses it, like an action hero through a glass window when something explodes.

The layout when you start the game is just as straightforward as the gameplay. The home screen displays the name with your stickman hanging from the title. Under the character are four buttons. One has the word Classic on it. This button is your basic Stickman Hook game, and it consists of levels increasing in difficulty. Under the play button, there is a button for the challenge mode that unlocks after level 25. Just above the button, you’ll find two other buttons. The one on the left is a link to buy the paid version that removes the ads. The button to the right of it, lets you choose a skin for the character.

The game is a great way to kill time, whether it’s sitting on public transport or waiting outside an office for someone. Stickman Hook gives you something to do when there’s nothing to do.

The game has an arcade feel to it because the controls are so simple that people who have never played video games will have no trouble at all getting used to it. Our hero drops in at the beginning of every level, rolls into a little ball and awaits the touch of your finger. It’s the player’s responsibility to use his momentum and launch him in the direction of the poké ball symbols where a dotted circle will appear around to show that it’s targeted. Once the circle is targeted, you press on the screen and like Batman, your hero will shoot a grappling hook and attach to the ball with a rope.

The hero then swings like Tarzan and releases when you lift your finger from the screen, rolling himself into a blob form again. In between, there are black lines that act like a trampoline. These “trampolines” can launch according to how they are positioned, very helpful most of the time but unbelievably annoying in some stages.

At the start, the game isn’t very challenging, but some stages, later on, start to get a bit more tricky. Every few levels you unlock a new skin and after just an hour of playing you already have quite the wardrobe. There are even some clownish Hello Kitty looking skins you can acquire just by watching video.

Personally, I think features like these take away a certain challenge aspect. Putting on a skin you had to earn after hours makes you feel proud. The skin even looks better to you. When you remove a challenge like that and give away skins for watching stupid ad videos, it makes the skins that you did earn seem less special.

The game has a few glitches that are more funny than annoying. The one happens when you fall down and die. Still, as soon as you respawn, press the screen, the character will shoot the grappling hook to the last ball that was targeted.

In conclusion, I can say that I honestly enjoyed the game. The controls are easy and fun. The animation of the game is good and entertaining. The skins you earn or get for no effort at all, adding an energetic atmosphere to the game.

I wish they would just make the levels more challenging and less repetitive. Some of the levels you’ll notice look and play exactly the same. Adding more difficult levels to give players an actual challenge would improve the game overall and get more people playing.