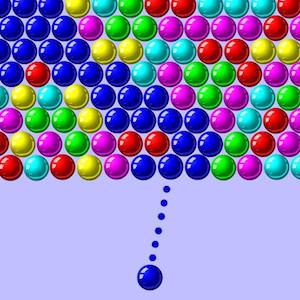 If you’re looking for a way to kill time on your commute to work or school, or you just can’t get enough of popping bubbles generally, then this game was made for you. Bubble Shooter apk for Android takes the classic bubble shooting approach and adds in some shazaz.

The aim of the game is simple – you just have to pop the bubbles before they get to the bottom of the screen and kill you. You use your little bubble cannon to shoot lines of three or more of the same color bubble to make them explode. The color of your bubble changes with each shot so that you can make combinations. The more you pop, the more power you get until eventually, you unlock a boost which allows you to pop loads of bubbles at the same time.

This very simple game is extremely addictive – it’s just like the arcade games of old that had millions of kids and adults alike hooked for days on end. Now you can get this awesome game on your Android device and play it whenever you want, with no internet connection required. You’re about to walk into a world of bubble popping that you won’t easily exit.

With more than 3,000 levels in total, the challenge carries on and on so you’ll never get bored. If there’s one potential pitfall of the game it’s that there isn’t much new challenge that can be brought into a game after 3,000 levels. That being said, if you’re a fan of bubble popping or puzzle games in general then you’ll likely enjoy this a lot. On top of that, you can come back to Bubble Popper apk anytime and carry on from where you left off, meaning the fun never really dies – just leave it a week and jump back in next time you’re bored. It’s free, so what is there to lose?

Now that you know a bit more about Bubble Shooter apk, let’s have a closer look at what makes this game tick. While there are tons of simple arcade-style games for Android, not all of them function as smoothly as this one and some of them get very boring and repetitive after a little while. Not this one though, Bubble Shooter apk has a whole other thing going on. Let’s have a closer look.

GRAPHICS: Okay, there’s no console-level detail going on here, but the graphics are pretty good all the same. At least, they’re good enough to satisfy the needs of someone procrastinating. It’s a real pleasant experience to watch the little bubbles pop en masse and cause chain reactions which lead to your laser boost being charged and eviscerating them all.

SIMPLICITY: There’s nothing like a simple game to pass the time. You don’t need to be overly skilled in order to play Bubble Shooter APK – you just need to know how to operate the simple controls and the rest is like clockwork. You’ll get gradually better and better at the game and the more complex levels will become easier to deal with.

PHYSICS: The angles the bubbles bounce off the walls is a key way to reaching those hard to get to spots. The game’s developers have addressed this with care, making sure that the physics of Bubble Shooter apk is completely on point. What would a bubble shooter game be without the physics? Tetris is what it’d be. And that just doesn’t cut it anymore.

MODES: You can play three different modes in Bubble Shooter APK. Choose Classic mode, where you gain extra points by clearing the board of bubbles in as few as shots as possible. You can also play in Puzzle mode, which offers cool boosts and power-ups, as well as daily rewards for good scores. If you’re really feeling up to a challenge, then you could play in Colorblind mode, where you can’t tell the color of your ball and have to just hope that it’ll match the bubbles that you’re shooting at. This mode adds a very high level of challenge and isn’t for the faint hearted – it’s essentially like playing tennis with a blindfold on. But that makes it all the more fun, doesn’t it?

FREE: Perhaps the best thing about Bubble Shooter apk for Android is that it’s totally free to play. You won’t have to worry about spending your hard earned cash on something that you might not even like. Of course, there’s no such thing as a free lunch – so you will have rightly guessed that there are ads in the app and that you can make additional in-app purchases if you choose to. That being said, for the most part, you can enjoy all the features of this puzzle game without having to spend any money whatsoever.

AIMING: You can choose between three different aiming systems: Crosshair, if you’re feeling like a sniper; laser mode for if you miss those P90 days in COD; or just by simply tapping on the screen to indicate exactly where you want to shoot the ball into the bubbles. The choice of aiming gives you more control over the gameplay and helps you to make the game feel more like something that has a bit of you in it.

While the game is awesome, it has to be said that if you’re not a fan of simple puzzle games, then you probably won’t play it for long. Bubble Shooter apk is a game for those who enjoy the simple things in life and not so much for those who are more into complex strategy games or shooters that rival those on a console.

The only other downside about this game is the ads, although this is standard practice and you can pay to remove them if you want.

To get in on the bubble popping fun, simply press the download button at the top of this page. You’ll be taken to the Google Play Store where you can press download to install the game for free. Enjoy

Be the first to review “Bubble Shooter” Cancel reply