Metal Soldiers 2 combines the adrenaline of platform-style games with the action of 2d shooters. 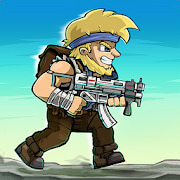 Metal Soldiers 2 is a good action game for Android from the Play365 publisher. In the game, you will play the role of a brave soldier, overcome all 15 arduous tasks to shoot down enemies, even blow up enemy’s tanks and planes.

If you are passionate about shooting action, then Metal Soldiers 2 APK will be a game that you can’t ignore. It is a combination of an attractive platform style and 2D shooting action. In this playground, players will be playing the role of a fearless soldier who always moves forward. That’s why he was called a metal soldier. He has to deal with many opponents and must wipe out those who stand in the way. Initially, you will only be given a simple shotgun with low firepower, but then it will upgrade to more powerful weapons.

Get ready for stressful matches that take place in many different locations of this Android game. Take the hero through each level, jump to different areas, try to discover the enemies, and destroy them before they can manage. More specifically, users can control tanks, robots, and other advanced combat vehicles. Use the arrow keys with four directions in the left corner of the screen to control the character to move around. Also use the function buttons, including jumping, shooting, and throwing grenades in the right corner of the screen to destroy the enemy.

During 15 challenging missions, sometimes players will be put into a fierce tank battle, facing a powerful giant machine or a rebel force’s combat helicopter. Be careful because rebels have equipped some new equipment with tremendous destructive power. Join the tank battle right away, destroy enemy’s aircraft with air-to-air missiles, and kill all enemies in this awesome shooting game.

Transform yourself into a brave soldier and keep moving forward

You can click the link above the page to download and install the game to your Android devices.  Metal Soldiers 2 APK is quite light in size and is provided free of charge. Download this game immediately. Get involved in the battle of Metal Slug style and relive your tough childhood!

Fortnite Battle Royale
Rated 5.00 out of 5