Minecraft: Where to find slimes 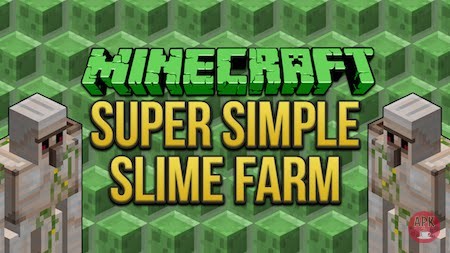 Let’s find slimes and build a smile farm at ease with the instructions bellow.

>>HOW TO MAKE A SADDLE IN MINECRAFT

WHERE TO FIND SMILE AND BUILD A SMILE FARM

Where to find Slimes in Minecraft

For Minecraft Survival, in single-player, LAN, and offline mode, you can find the Slime spawn in swamp areas. Also, if you want to search without going to the swamp, there is a way, as follows:

Step 1. Go into the game, open the chat frame and press /seed, then you will see a sequence of numbers, as in the following picture.

Step 2. Go to this link http://adf.ly/1RHZ3e and enter the sequence of numbers you’ve just found in the seedbox, as shown below.

When finished importing, you click find slimes!. It will display a checkerboard with green checkers, which is the chunk of the Slime. You just need to wait for Slime to appear and kill. Also, to determine its position, you enter the coordinates X and Z in the image. You will find out where the Slime is.

If you play in servers (especially skyblock), the only thing you can do is build your own skyblock, then wait for the Slimes and kill them.

Why I don’t see the Slimes appear above the chunk.

First of all, you should know that even though they are slime chunks, Slime spawns less often than other creatures. So, make sure you wait long enough. Besides, you can check the seed along with the coordinates. Here are some things to consider:

How to build a Smile farm

Before building a slime farm, you need to decide whether to build it in slimes or a swamp. Each block created in a world has a 10% chance of being a slime block. In slime blocks, Slimes may multiply when Y <40. (Besides: Some websites can map slime blocks for you).

The first step in building one of the two farms is where the spawn is. In most farm designs, the spawn platforms created to spawn slimes are then transferred to a killing trap, usually a drowning trap to divide larger slimes and send the smallest slimes. Spawn pads are usually constructed with a spacing of 2 of 1/2 blocks by using slabs to allow all types of slimes spawn.

It is important to brighten up the development spawn platforms. Otherwise, other hostile mobs can also spawn. It is also advisable to light the area within a radius of 128 blocks around the farm to keep the hostile mob cap as low as possible.

The second step in building a slime farm is transporting. Players can achieve traps in table 1.8 are by using a ‘water channel’ separated by symbols. Because Slimes can swim in snapshot 14w06a and above, a specific water position is required in Java Version 1.8 and above.

Separation and destruction of traps

The final step in building a slime farm is to separate traps and destroy them. To separate the various sizes down to the smallest, we often use the drowning trap. The largest Slime is divided into medium and from medium to small sizes. The Slime is then taken to another pitfall to be killed, usually another drowning trap. For greater efficiency, the decoy trap can also be used as a kill trap, although this can be difficult in a slime farm trap if the spawn room is too small.

In addition, you can also use a stream of water carrying Slime to flow into the cactus trap. The funnel around the root of the cactus will collect the droplets. This has the advantage of handling all sizes of Slime without having to separate. One drawback of this method is that cacti destroy about 20% of the pieces dropped.

A quick and low-cost method to handle Slime is to use magma blocks. Slime can be pushed there by a stream of water, pulled by the iron golems, or drifted anywhere. You can use a tracking Minecart funnel beneath the magma blocks to collect droplets.

For an interesting option, the “vengeful” named Johnny will attack all Slime, but the Slime will not be able to affect them.

To automatically collect farm-produced pieces, make a hole below the end of the trap. Place a number of funnels (it is recommended to use holes 2 × 2 for greater efficiency) on two chests.